Smoke shops in Catoosa County, Georgia, recently got a letter from Sheriff Gary Sisk notifying them they are violating state law. In short, the legality of Delta 8 Georgia is being challenged by local authorities, who have raided shops in the meantime; leading some Delta 8 Georgia smoke shops to sue. The letter says “the products the sheriff’s office has purchased and tested all contain significant levels of Delta 9.”

According to the 2018 Farm Bill which legalized the production of hemp products that contain less than 0.3% THC based on the dry weight. Delta 8 Georgia legal status is currently being challenged by local authorities who are racing to declare Delta 8 illegal in Georgia, although that contradicts any Farm Bill compliant products. We saw as similar scenario in Texas last year, where store owners challenged local authorities to keep Delta 8 legal in Texas … although that may change.

Some local smoke shops are opting to pull hundreds of Delta 8 products off of their shelves, resulting in shops currently suing the state for violating the 2018 Farm Bill. 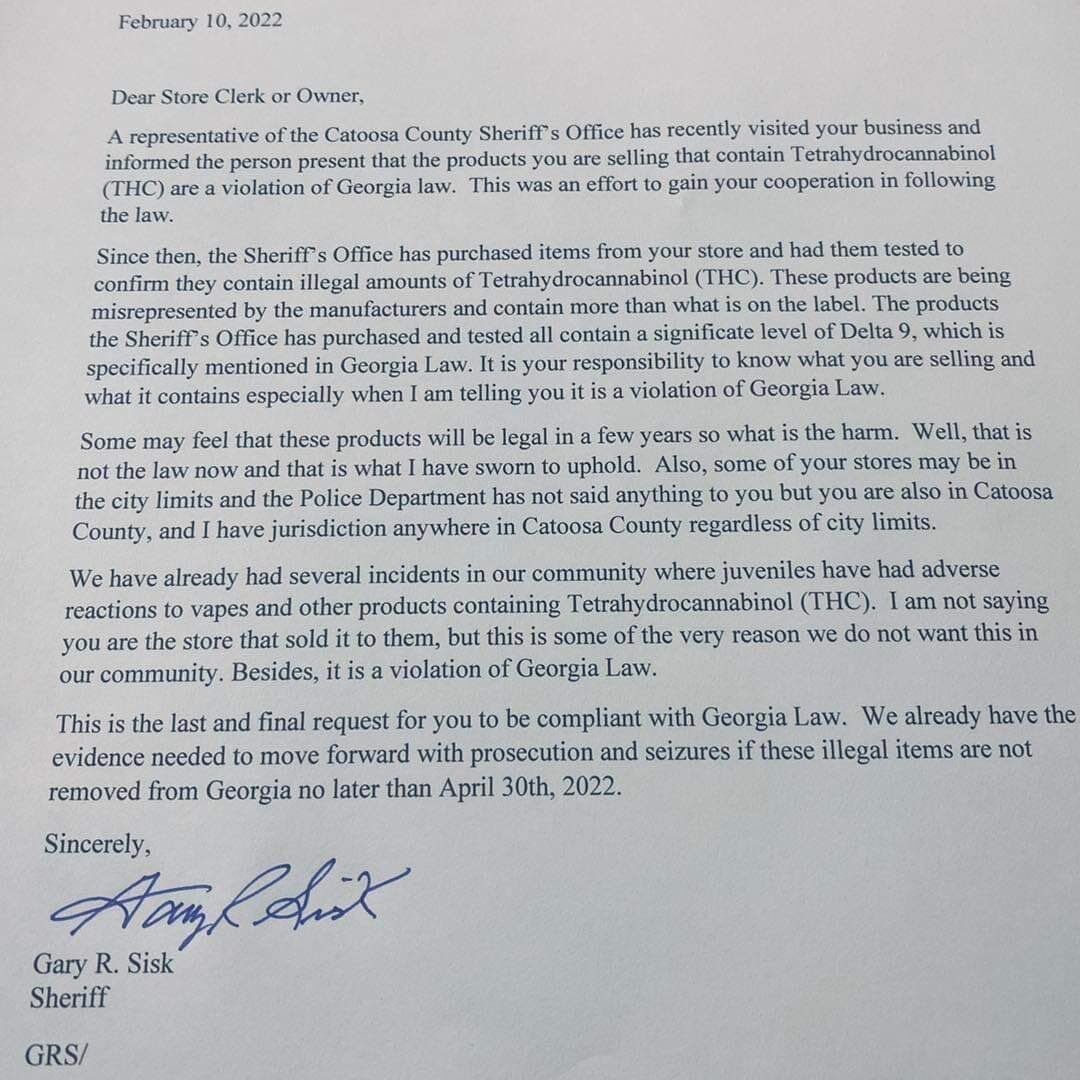 Delta 8 Georgia On the Radar

Delta 8 THC is synthesized from CBD. CBD is a popular non-intoxicating chemical that’s prevalent in hemp which Congress legalized through the Farm Bill in 2018. Delta 8 Gerogia seems like a similar situation we’re seeing an alarming increase across the nation. Delta 8 THC is legal when compliant with the Farm Bill, therefore using the argument that the sample from one smoke shop contained too much THC is moot. It’s obvious officials want Delta 8 in Georgia to be declared illegal, but store owners are putting up a fight.

Sheriff Sisk says he is giving the companies until April 30th to remove the products from their shelves.

The letter his office sent says investigators already have “evidence needed to move forward with prosecution and seizures.”

“The Shoppe” owner Joe King says after receiving this letter they pulled more than 380 items off the shelves.

“The Shoppe” owner Joe King says after receiving this letter they pulled more than 380 items off the shelves. That’s over $11,000 in revenue lost. But he says he shouldn’t have to do this because he believes Delta 8 Georgia is legal under state and federal law. (Image: WTVC)

One lawsuit is filed on behalf of Element Distribution, a vaping and smoke ship distribution center, that was raided on February 22. A video of the raid shows more than a dozen officers dressed in riot gear with weapons drawn entering the company’s warehouse.

Element said around $2 million worth of bulk Delta 8 products seized from and no one was arrested when and no charges were filed. They told CBS46 that they have always run their business legitimately and continue to do so and that they have been paying taxes to the county on the very same products that were seized.

Another, Atlanta law firm said it filed a lawsuit Thursday after the district attorney in Gwinnett County threatened to prosecute businesses selling products with Delta 8 and a related chemical, Delta 10.

The Fate of Delta 8 in Georgia

Many local store owners, such as King, point to the medicinal uses of products like Delta 8, which includes treating pain, some symptoms of certain cancers, and its role in weaning addicts off of opiates.

He says his greatest concern is his customers who rely on the substance for medical purposes and will likely now cross state lines to Tennessee to pick up the product. Resulting in increased risk for Delta 8 Georgia consumers, massive profit loss for local shop owners and a blow backward for marijuana and hemp reformation in the state of Georgia.

THC-O Acetate & Delta 8 in one, InjoyExtracts new release! Don’t wait, your state might be next & it’s too late!