What can natural nootropics do for you?

Natural nootropics have benefits both in the long term and in the short term. One of the greatest benefits – apart from the boosting of cognitive functioning – is in the adaptive stress response. Some of these compounds can enhance the ability of the brain to resist severe or chronic stress, which can help reduce inflammation and all the health issues that may arise from it. Additionally,  there is now a good body of evidence that long-term use of several food-based nootropic agents such as Curcumin and Lion’s Mane can mitigate, or even reverse age-related cognitive decline [1].

Which natural nootropics are available and what are their benefits?

Here is a list of the most effective natural nootropics with some additional links for those of you who want to dig deeper into a specific nootropic. 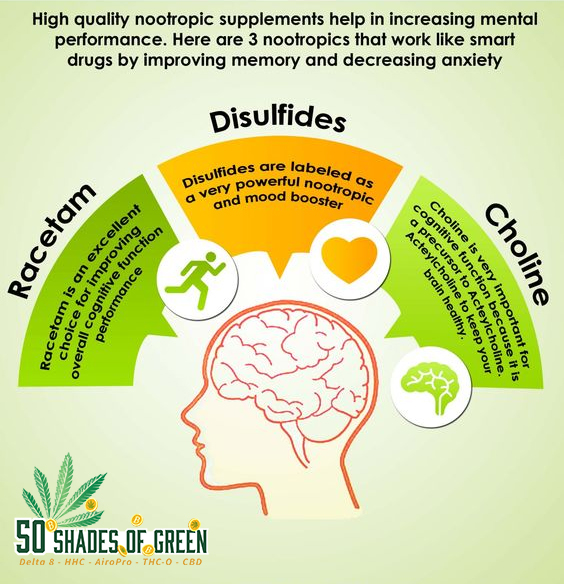 Curcumin is an antioxidant powerhouse! Not for nothing, it is called the anti-Alzheimer’s spice. Curcumin has the unique ability to reduce inflammation in the body and brain. It is antibacterial, anti-cancer, anti-inflammatory, and antiseptic.

Curcumin is the bioactive part of Turmeric and is concentrated in the stems of the Curcuma Longa plant. Some neuro hackers maintain that Curcumin is the best nootropic of all.

You can increase the bioavailability – i.e. the extent a substance or drug becomes completely available to its intended biological destination(s) – of Curcumin by combining it with Piperine (i.e. black pepper extract) as we do in our Curcumin Complex, and healthy fat such as olive or coconut oil. Coconut oil plays an important part across the with supplements as many 50 Shades of Green articles involve coconut-based products.

To witness the nootropic effects on mood and stress, dose Curcumin 2.5 – 4 grams per day. [2]

A good night’s sleep is about the nearest we can get to the perfect nootropic. Melatonin is a hormone made in your pineal gland. Your body produces it when it’s time to go to sleep.

Melatonin levels are low during the day and peak at about 2 – 3 AM depending on your age. After that, they steadily decline until morning.

Don’t take Melatonin during the day or it will disrupt your natural circadian rhythm. Melatonin is ideal as a nootropic supplement taken 1 1/2 hours before bed.

The appropriate dose of Melatonin can vary widely from person to person. Start with 1 – 3 mg, 90 minutes before bedtime. See how you feel and whether you readily fall and stay asleep until morning.

Then adjust your dose from there – up or down. Most people don’t need any more than 3 – 5 mg of Melatonin per night. Some need even less. [2]

RELATED: USE CBG. “NATURE’S MELATONIN” – AND FALL ASLEEP WITHOUT SIDE EFFECTS!

L-Theanine, which naturally occurs in green tea and oolong tea, is an amino acid that is used as a nootropic for anxiety, learning, mood, and focus.

Since it easily crosses the blood-brain barrier, L-Theanine works quickly to increase dopamine and serotonin – the ‘feel good’ neurotransmitters in your brain.

As a bonus, the Caffeine jitters are reduced when combined with L-Theanine.

AMPK (i.e. adenosine monophosphate-activated protein kinase) is an enzyme found inside each of our cells and works as the body’s master regulating switch.

AMPK is reduced as we age, but it is possible to increase AMPK using compounds such as Rhodiola Rosea.

When AMPK is ‘switched on’ it triggers the use of stored energy from fats, removes fats and sugars from the blood, reduces inflammation, and takes out the cellular ‘garbage’.

When AMPK is activated in brain cells it prevents diseases such as Alzheimer’s and Parkinson’s.

Rhodiola Rosea is a plant that grows at high altitudes and in cold regions of the world. It decreases depression and stress-related mood swings, reduces fatigue, stimulates energy and alertness, and boosts cognition.

Comparatively speaking, research has suggested that Rhodiola Rosea with 3% Salidroside is more stimulating whereas Rhodiola Rosea Extract with 3% Rosavins is more calming or relaxing which is an important distinction to make when considering which Rhodiola Rosea may work best for you.

RELATED: The Benefits Of Kava Root

Caffeine is the most widely used psychoactive drug in the world.

Studies show chronic Caffeine consumption may protect against developing neurodegenerative diseases such as Alzheimer’s and Parkinson’s.

Caffeine improves mood within an hour of consumption. This is because it increases the density of GABA receptors, potentiates dopamine, and causes some serotonin receptors to be more responsive.

There are several benefits of using Caffeine stacked with L-Theanine. [2]

Unlike other nootropics which often modulate neurotransmitters, Lion’s Mane goes to the root of the problem.

It prevents and treats nerve damage by boosting Brain Nerve Growth Factor, and neurogenesis – i.e. the process by which new neurons are formed in the brain.

The Lion’s Mane mushroom grows naturally in the wild in Europe, Asia, and North America – beginning to grow in the late summer through the fall, primarily on hardwood trees.

Lion’s Mane Mushroom dosage largely depends on the strength of the extract.

[1] What on Earth Is a Natural Nootropic, and How Do They Actually Work?

[3] For additional reliable information on any nootropic consult Examine.com.