What is HHC-O? What Are Cannabinoid Acetates?

Today’s cannabis industry is moving at lightning speed, and we’re constantly learning about new discoveries relating to the plant. One of the latest trends getting ready to blow up the industry is HHC-O Acetate: a brand new cannabinoid that very little is actually known about. Let’s get into what exactly this psychoactive compound actually is, how it is created, and where you might be able to find it.

The acetylation of cannabinoids explained

Acetylation starts with the main cannabinoid, and only the psychoactive ones have been used, so THC and HHC. The acetate version (-O) is what’s referred to as a semi-synthetic derivative, or an analogue. Using a chemical catalyst called acetic anahydride, you can turn THC and HHC into THC-O and HHC-O. These both are said to be more potent than the original compounds.

In short, THC-O is an analog of THC, and the same is the case for HHC-O and HHC. They have similar chemical structures. However due to chemistry, minor differences often lead to substantial changes. The acetate versions are synthetic cannabinoids that can only be produced in a laboratory setting. Preferably manufactured by an experienced chemist. It should be emphasized that these acetates are NOT found in the cannabis plant. With the rise of DIY technologies, it can be tempting to try and make these compounds yourself. It’s vital to remember the process can be challenging and quite dangerous, so it’s best left to the professionals.

Serge Chistov, the inventor of Nanobidiol Technology, says his team has found a safe and efficient method to acetylate THC using only approved solvents. Chistov says his team “developed the analytical standard for testing for THC-O. Additionally, his team is currently in the final stages of introducing products to retail outlets.” So, if everything stays on track, we can expect to see THC-O therapeutics relatively soon.

And Christov is not the only one working to perfect the process. In a patent filed by NextLeaf Solutions, they described their process for manufacturing THC-O Acetate. “A process for producing THC-O-acetate using a succession of distillation, salting-out assisted liquid-liquid extractions (SALLEs), and solvent recovery techniques. Tetrahydrocannabinol (THC) in cannabis oil reacts with acetic anhydride under reflux to produce THC-O-acetate and acetic acid. The resulting crude product is distilled and subjected to a SALLE with hexane followed by a SALLE with petroleum ether…before being distilled again in order to obtain a refined, THC-O-acetate product.”

It’s complicated, volatile, and it is even really worth it? Sure, these compounds might be a bit stronger than their plant-derived counterparts, but that doesn’t mean they are better. And if you’re a purist like many who are drawn to cannabis in the first place, no synthetic can ever be better than the real thing anyway. 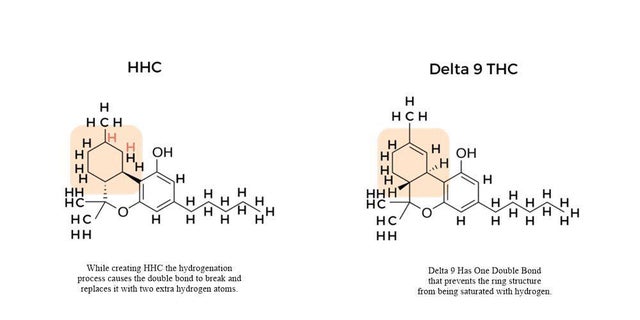 Honestly, the available information on HHC, scientifically known as 9-Nor-9β-hydroxyhexahydrocannabinol, is extremely sparse and somewhat contradicting. Let’s start with whether it’s natural or synthetic: it can be both. There is a biologically active naturally occurring (−)-hexahydrocannabinol, as well as its synthetic enantiomer (+)-hexahydrocannabinol.  The latter being what you’ll find in consumer products since natural HHC is only present in very trace amounts.

As the name suggests (Hexahydrocannabinol vs Tetrahydrocannabinol), HHC has many similarities to THC. It’s basically a simplified version of Delta 9 THC. Both HHC and THC have very similar molecular structures and comparable effects, although HHC is milder. It was discovered during research in the 1960s and 70s in which the goal was to find the most basic cannabinoid.  Such as substances that could still bind to CB receptors.

Very limited studies indicate that HHC has a decent safety profile in animal models and that it could have some medical potential. We’ll get more into that a bit later. However, claims made by retailers regarding its legality and where it comes from are misleading at best, complete lies at worst. What Is HHC (Hexahydrocannabinol) and Is It Safe To Use?

Is HHC-O stronger than HHC? What about Delta 9 THC?

Here’s where things can get a bit confusing. When trying to measure the strength of a cannabinoid, we tend to compare it to the golden standard, which is Delta 9 THC. So if HHC is less potent than Delta 9 THC, but HHC-O is more potent than HHC, where exactly does that put it?

Honestly, all these comparisons are a bit arbitrary because it’s not always about potency per se, but the overall effects of the compound. When you’re using whole plant products like real flower or live resin, you’re benefiting from the entourage effect.  This is not just a therapeutic phenomenon – it applies recreationally as well. You get higher when there are terpenes, flavonoids, and all the natural cannabis compounds in the products you’re consuming.

Now, synthetics aren’t inherently bad. If they’re safe and produced by an experienced professional, they can be fun and certainly have their place in both medicinal and recreational settings. But you’re definitely not going to get the same kind of high or experience with these products as you would with good old-fashioned delta 9 flowers. If you know what to expect, you won’t be disappointed though. Especially in states without recreational laws, you can see that comparing which one is “stronger” doesn’t really make a lot of sense. Consumers in these states have limited options.

The resounding assumption is that, because HHC is structurally different THC, it will not show up on a drug test. The reasoning is that it does not produce the same metabolites in the human body. When it comes to cannabis, standard urine tests are used to detect use ranging from roughly 1 to 45 days. Occasional users will typically be clean after 1-5 days. Regular light users will take about 1-3 weeks. For heavy daily users, expect 4 to 6 weeks to get clean.

Contrary to popular belief, urinalysis does not screen for the THC (tetrahydrocannabinol) in cannabis. Rather, they detect the metabolites created by the human body when we are exposed to THC. This class of metabolites is known as THC-COOH. These metabolites are nonactive, so drug tests are only measuring exposure.  Tests are NOT measuring impairment. Marijuana impairment cannot be detected through any kind of test thus far.

THC-COOH, or “carboxy THC” is the most common name for this metabolite. It’s the second THC-metabolite formed in our bodies, following hydroxy-THC. This occurs Immediately after exposure. THC-COOH is lipid-soluble, meaning it’s stored in our fat cells making it detectable in our systems for much longer than other substances,.  Those that are water soluble for example. Now, when it comes to all the new cannabinoids like HHC, HHC-O, THC-O, and so forth, the lines get a bit blurry.

Please note that this is not something we personally have knowledge about.  We have never tried to drug test for HHC because we use THC products regularly. In short, we wouldn’t make very good test subjects. But according to numerous reddit users, this is accurate. Many claim you can pass a drug test if you’re only using HHC.

Learn more: Does HHC Show Up On a Drug Test?

Where to find HHC-O products…

At the moment, pretty much nowhere. But a few companies that we work with, whose products you’ve likely seen in our newsletters.  They planning to launch HHC-O vapes, tinctures and more in the upcoming weeks. The first to do so is Injoy Extracts, which released a 25mg HHCO acetate gummy bears. HHC-O gummies are available online at their website InjoyExtracts.com!